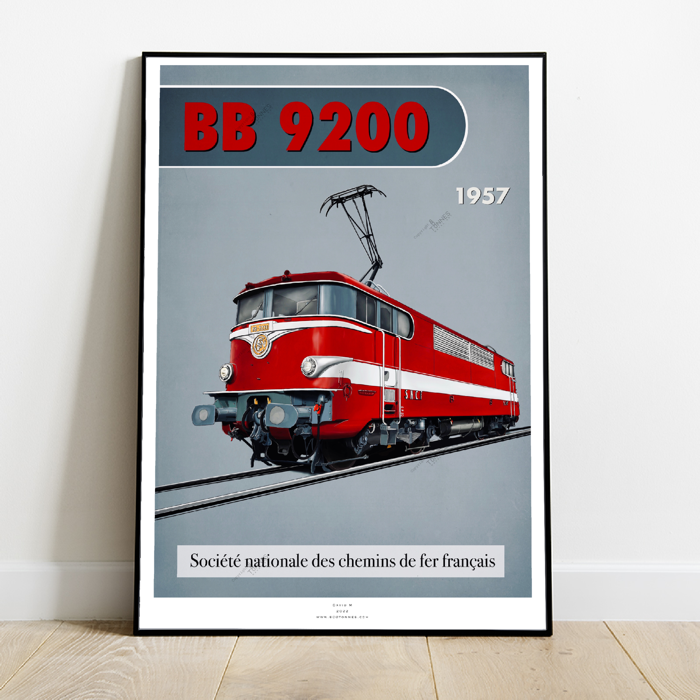 A digital drawing of the french locomotive BB 9200

The BB 9200 is a series of French electric locomotives running on 1,500 V direct current, built in 92 units by the companies Creusot-Loire, Jeumont-Schneider and CEM. They were delivered to the SNCF between 1957 and 1964

Their "BB" type architecture (four driving axles divided into two bogies) is lighter than the "2D2" and "CC", while maintaining a fairly high power output (3,850 kW).

They are based on the structure of the BB 9003 and 9004 and their bogies designed by André Jacquemin, while the engines are taken from those of Swiss origin of the BB 9001 and 9002.

This series of locomotives began its prestigious career pulling large passenger trains in the south-east from the Paris-Lyon station to Lyon and then Marseille and south-west from the Paris-Austerlitz station to Toulouse and Bordeaux. They have also pulled famous trains such as the Mistral, the Train Bleu, the Simplon-Orient- Express and the Rome-Express.

The greatest success will remain the introduction of the first train running at 200 km/h in commercial service from 1967, "Le Capitole", between Paris and Toulouse (livery shown here)