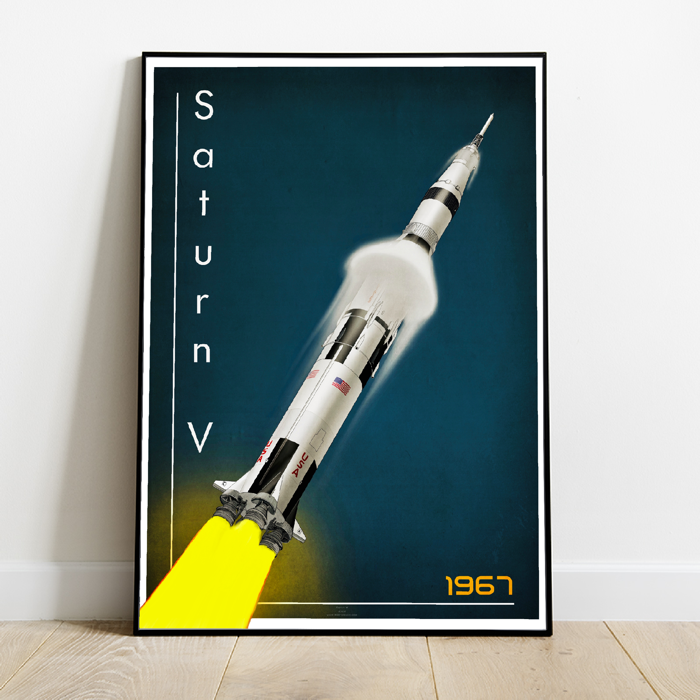 A Poster of the American Saturn V launcher, which took the Apollo crews to the Moon

Saturn V is the name of the space rocket used by NASA for the Apollo programs (and also a mission for Skylab) between 1967 and 1972. It resulted from the desire of President Kennedy, in the early 60s, to sit supremacy American on the Soviets in the space race.

Saturn V had several stages, with liquid propellants. This launcher was the latest addition to the "Saturn" family of launchers designed under the direction of Wernher von Braun.

Saturn V was the most imposing space launch vehicle that has been used in operation, whether by its height, its takeoff mass or its mass of the payload injected into orbit.

Only the Russian Energia rocket, which only flew for two test missions, exceeded it a little in take-off thrust.

Its main mission was to send men to the Moon. This is how 12 Americans were able to set foot on our satellite.

Note that a mission was also dedicated to the "Skylab" manned station experiment.

In all, NASA launched 13 Saturn V rockets, without having to deplore the slightest loss of payload. Only the Apollo XIII mission experienced a major malfunction of the service module, but the crew could be brought back safe and sound thanks to the talents of NASA engineers.