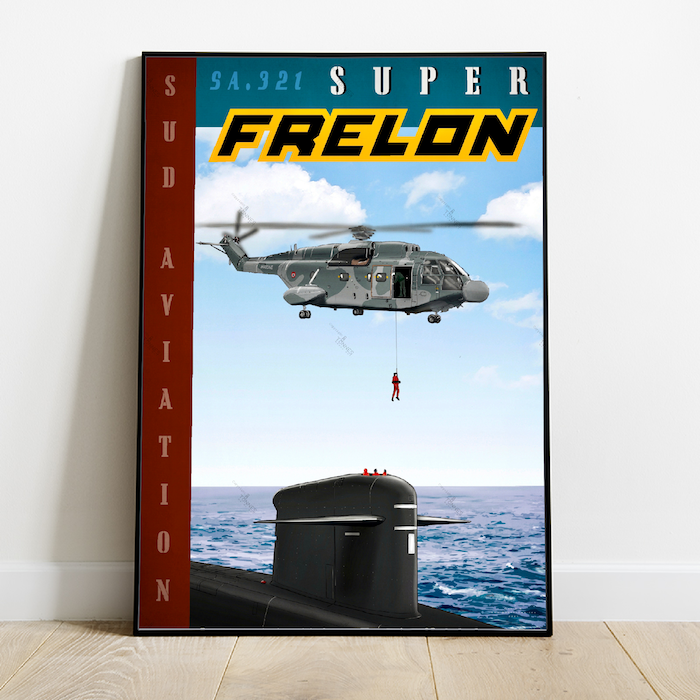 The Super Frelon SA 321 G was first delivered to the 32F flotilla around 1970 and to the 33F flotilla in 1979. With a mass of 13 tonnes at full load, it is a versatile medium tonnage helicopter.

It is an amphibious aircraft, triturbine with exceptional carrying capacities: 27 seated commandos or 15 wounded lying down or 2 jeeps, for 22 m3 in internal load and 4.5 tons in suspended load. The loading on the ground is carried out by a rear loading ramp.

It is equipped with navigation and search radar, a 50-meter rescue winch; hovering can even be done automatically. Its main armament is a 20mm cannon.

It is also equipped with a decoy launcher, night vision system, laser designator and PLS (Personal Locator System). In-flight refueling (HIFR) can be done from any helicopter platform in a NATO building.

The first landing of a Super Frelon took place on August 28, 1963 in the harbor of Brest on board the helicopter carrier La Résolue (future Joan of Arc).

From 2003, the mission of the Super-Frelon is essentially maritime safety. With 50 to 55 rescue operations per year, the helicopter is able to provide assistance within a radius of 180 nautical miles (320 km), right up to the middle of the Bay of Biscay. Seven out of ten rescues take place at night, half of them involving seriously ill or injured fishermen.

In 2009, there were only 4 Super Frelon left, operated by the 32F flotilla from the air naval base of Lanvéoc Poulmic. It was on board the Charles de Gaulle aircraft carrier that the Super-Frelon made its final landing on April 28, 2010.

The last Super-Frelon helicopters were withdrawn from active service on April 30, 2010.