The Oscar II class submarines, internally named project 949A Antey, are "first rank submarine cruisers", designed by the USSR in the late 1970s. Along with the Typhoons, they are among the largest and the largest submarine in the world (150 meters long and 24,000 tonnes underwater).

The Oscar II (evolution of the Oscar I built in two copies) was born to meet a simple objective: to be able to destroy an aircraft carrier and its squadron, or more generally a carrier strike group.

To do so, it carries 24 Granit missiles with a range of over 500 km, with conventional or nuclear charge. These missiles have the particularity of being arranged in a "honeycomb" on either side of the submarine (hence its great width of more than 18 meters).

Twelve Oscar IIs were built in the 80s and 90s. One of the most modern, the K 141 "Kursk" will make itself sadly famous when it sank in August 2000 (118 sailors lost). This tragic accident is the subject of many theories, but it is above all the vain attempts at rescues that will mark public opinion.

The Oscar IIs are still widely used today in the Russian Navy, having been upgraded over the past decade to carry the new P800 Oniks missiles.

Poster produced with iPad Pro and Procreate in 2020

4 other products in the same category: 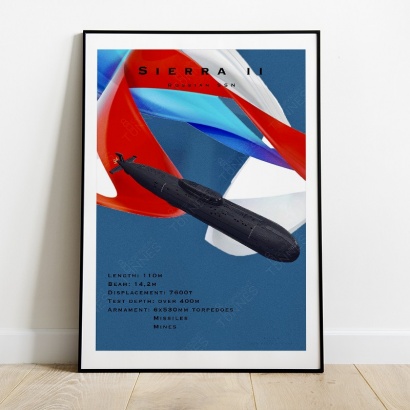