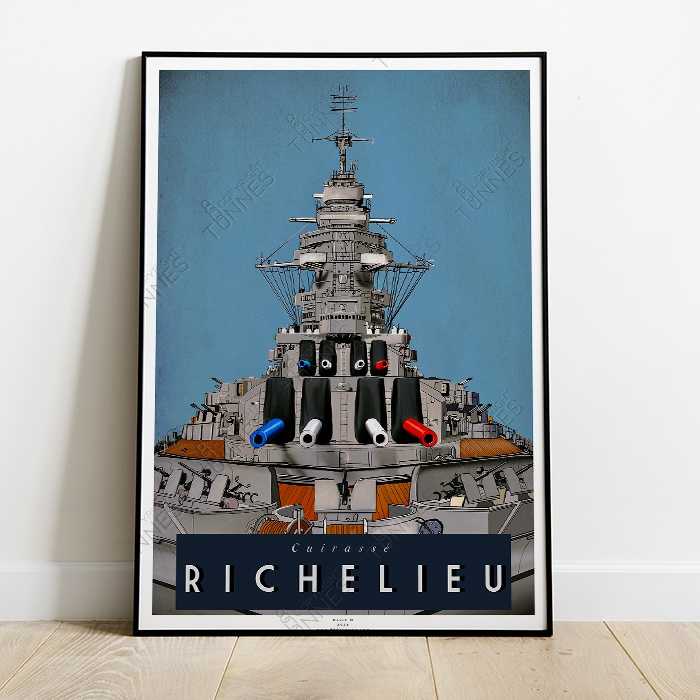 A digital drawing of the French battleship "Richelieu"

The Richelieu was a battleship of the French National Navy built from 1935, named in honor of Cardinal de Richelieu, for the founding role of this minister in the creation of a first French naval power in the early seventeenth century.

The first French battleship of the Richelieu class, with a displacement equal to the maximum allowed at the time by the treaties limiting naval armaments (35,000 tons), it was intended to counter Italian battleships of the Littorio class.

It was a more powerful version of the Dunkirk class, of which it took the specific arrangement of the main artillery in two quadruple turrets at the front, but this time at a caliber of 380 mm.

The Richelieu, who escaped from Brest in June 1940 in difficult conditions in the face of the German advance, was then implicated by the Vichy authorities in the face of British forces in 1940 in Dakar, where he was torpedoed on 8 July, and where he escaped. with light damage, to a joint attack by the British and the Free French Forces from 23 to 25 September.

After the Allied landings in North Africa, he sided with the Allies in December 1942. Modernized in the United States in 1943, the Richelieu operated in the Indian Ocean in 1944-1945, under British command, against the Japanese, and then participated in the return of French troops to Indochina.

Returning to France in early 1946, he experienced the life of peace buildings in peacetime.

In 1951, during a large fairing, he received new 380 mm guns. But budgetary means were lacking, when the Jean-Bart had to be completed, to bring the Richelieu to the level of the technologies of the 1950s, while the planes were significantly more efficient than at the end of the war.

From 1952 to 1956 he was assigned to the Groupe des Écoles de la Méditerranée in Toulon.

After maneuvering once with Jean Bart on January 30, 1956, he rallied in Brest where he formed the "Richelieu Maneuvering School Group" in pairs with an old three-masted house, the Duchess Anne118.